Lines.  Always lines.  Around the block.  Around the building.  Down the street.  If guitars aren’t involved the security groping is twice as violating for some reason.  Tonight’s shape was an elongated L around a trailer parked in front of the Washington Avenue Armory.  Thumping beats permeated the century old walls, military construction now housing entertainment the establishment doesn’t approve of.

Openers weren’t listed.  Still can’t figure out who the second guy was (good work sir).  Skill level rose and suddenly The Crystal Method was thumping bass.  A pair of screens flashed imagery while the veterans warmed up the assembly.  Ending suddenly, lights came up.

Grabbed a beer, wandering back toward the front while everyone shifted during intermission.  The venue’d filled quickly, 3,000 or so jockeying for position as the moments slid passed.

A cube was mentioned, but the rising curtain unveiled a scattering of pieces, one dangling, surrounding an enormous structure holding a mouse headed man aloft.  Floor wobbling beneath, bass beats vibrating the air.

Crowd roared while the first offerings congealed into the thumping electro beats that’ve vaulted Deadmau5 onto the world stage.  Visuals crawling, his standard stable of loops and effects pulsed through the armory.  As with any good performer, Deadmau5 kept things different, remixing his own sounds on the fly.  A massive screen covering the wall behind his cube seamlessly swirled imagery between the smaller blocks, lights flashing.

Children overran.  Every time something radical dropped in a surge of teenagers gushed forward.  Apparently running in place and pointing is dancing these days.  Resisted the urge to send a few sprawling as they barged by.  Loud bass is calming. 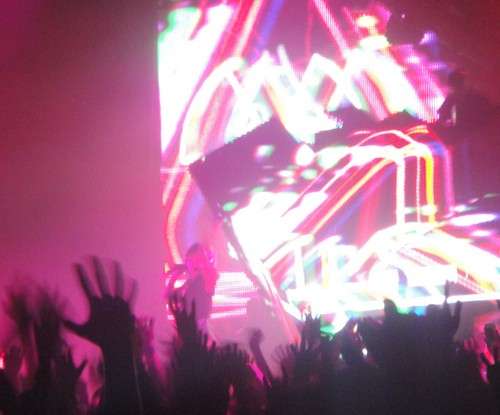 Waited all night for a pair of tracks.  Didn’t realize it was the new album.  When Some Other Female Interest hit the stage things got crazy.  Womps between house and dubstep escaped the speakers while Sofi’s rhythmic, almost taunting alto melded into his thumpings.

“Sofi Needs a Ladder” garnered some buzz over the year since the track’s release as the first single from 4×4=12.  Her vibrance re-energized the crowd.  All I want in your attention.  When Deadmau5 appeared on stage after the track, beats still bumping along in the back, she looked a little confused.  “What the hell are you doing?” was the query.

“It’s fuckin’ hot up there,” he replied before dancing a few steps to laughter and cheers. 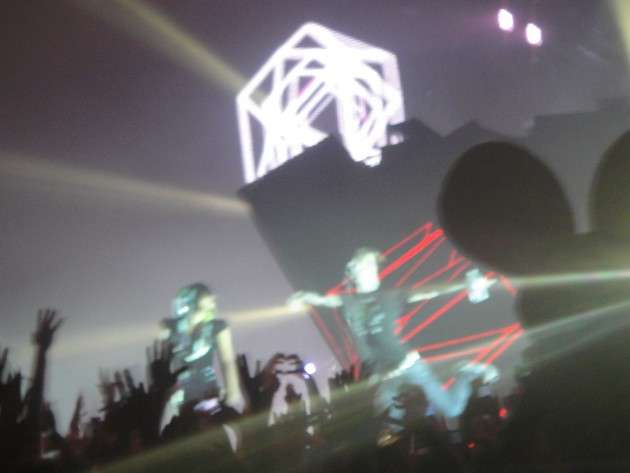 Sofi graced all with their other track before disappearing as things moved toward the end.  Gears began spinning.  Time stops for no one.  Visuals moved along with the progressive house offerings while the crowd slowly thinned, some escaping the heat and press. 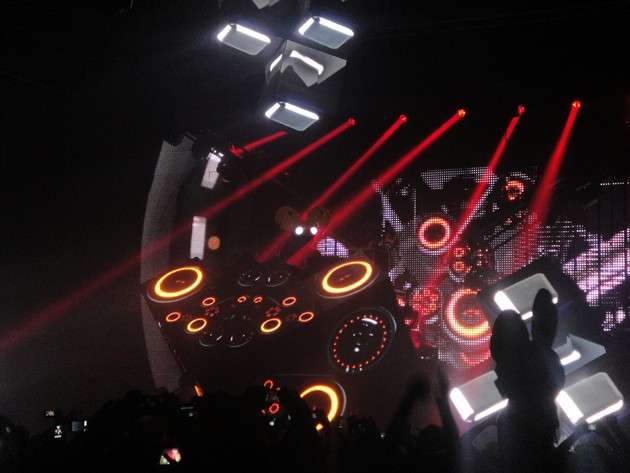 The sound stopped in the middle of a track suddenly, lights flooding on.  The crowd began chanting so we slid toward the rear.  Never like fighting spun out kids to get out of a place.  The Canadian illster reappeared to finish things off.  Thanks for making the trip sir. 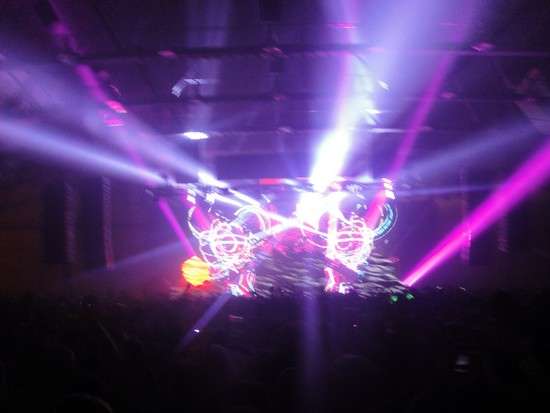 pissin' off readers since Camp Clusterfuck X
View all posts by a career in the haw haw haw haw →
This entry was posted in Electrocution, Muzak and tagged albany, deadmau5, musick, sofi, washington avenue armory. Bookmark the permalink.