Help Save the Delaware River Basin from Hydraulic Fracturing!

This meeting has been canceled as the governor of Delaware
definitively states he will vote “No” on the issue.
The rally will still be held on Monday to show support against drilling.

This does not protect the Delaware River in the long term,
but it’s an important victory for now.  Stay vigilant and don’t stop fighting.

The Delaware River Basin contains the drinking water of millions.   Run off begins in the Catskill mountains, traveling south as 216 tributaries combine to form the Delaware River on its’ southerly journey.

Forming the border between Pennsylvania and New Jersey, the Delaware supplies drinking water for roughly 5% of Americans, 15 million souls.  The recent growth of natural gas development throughout Pennsylvania puts this water at risk. 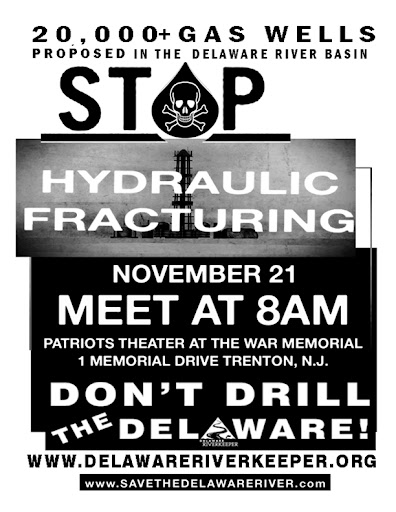 The Delaware River Basin Commission, created by a Supreme Court decree in 1954, brings together the governors of all four states bordering the Delaware River and the Army Corps of Engineers.  Among the purposes of this body is “water quality protection” 1 for this vital supply of drinking water and everything it affects from fishing to agriculture.

On November 21, 2011 the DRBC will meet in Trenton, New Jersey to decide the fate of the Delaware River.  On the table is the proposed opening of the Delaware’s watershed to natural gas drilling, in the form of horizontal hydraulic fracturing.  All signs point toward approval, possible tax dollars and job creation overriding all other objectives.

Residents of all four states have raised concerns over the last three years.  Over 69,000 filed comments during a period of public response to possible gas drilling regulations.  On November 21 no public hearing will occur.  Care about your drinking, farming and recreational waters, make a stand in Trenton, New Jersey.  The rally will meet at 8 am.  Below are links to information and bus pools making the trip from all four states:

* The Delaware River Keeper: information on the Delaware and DRBC meeting

* Save the Delaware: information about possible drilling and the DRBC meeting

* Bus Information to DRBC Rally: Buses are travelling from all four states.  See if you
there’s ride near you.

The three year fight over continued drilling in the Marcellus Shale is about to come to a head.  All water is connected, damage done in one area will be felt everywhere.  If you have the time, try to make the trip and demand protection for the Delaware River watershed. 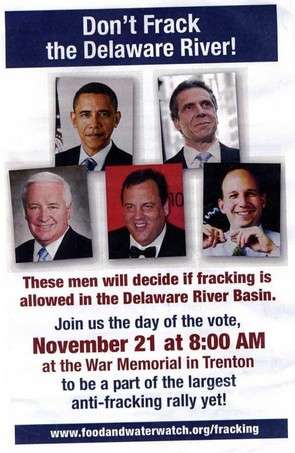 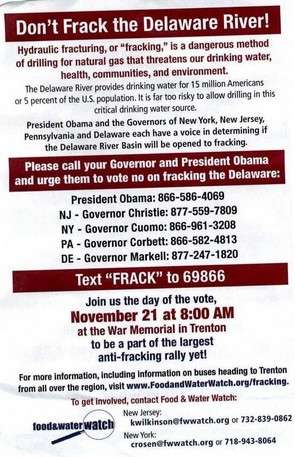 Our future is depending on you

Don’t repeat the mistakes of the past