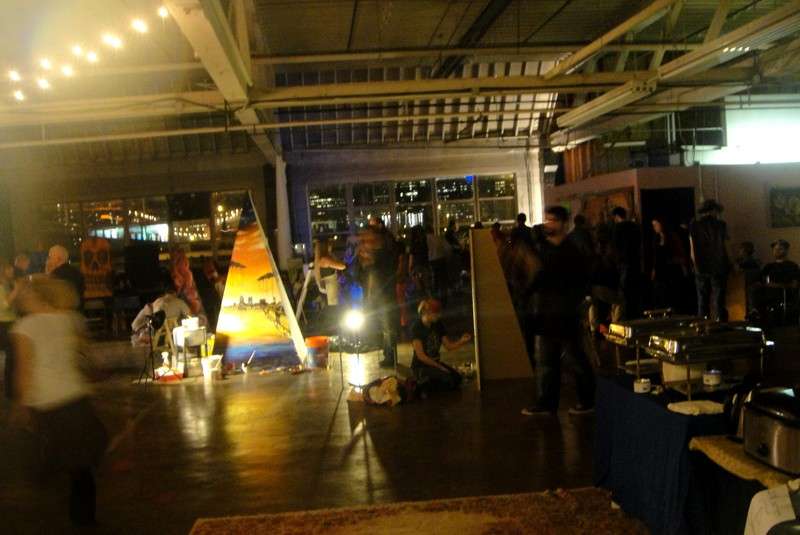 Hump Day continued through the fall weather before deciding to move things indoors as the winter rains set in.  The last Wednesday of February found the event moved to a new location.  Alexeisia’s Center for the Arts, a non-profit working to allow an affordable space for community artists of all stripes, offered up their 4,000 square foot shared space for the evening.

A dozen or so artists filled the space.  One walled section housed a silent auction while the majority of attention revolved around live creation through the uneven illumination of spotlights. 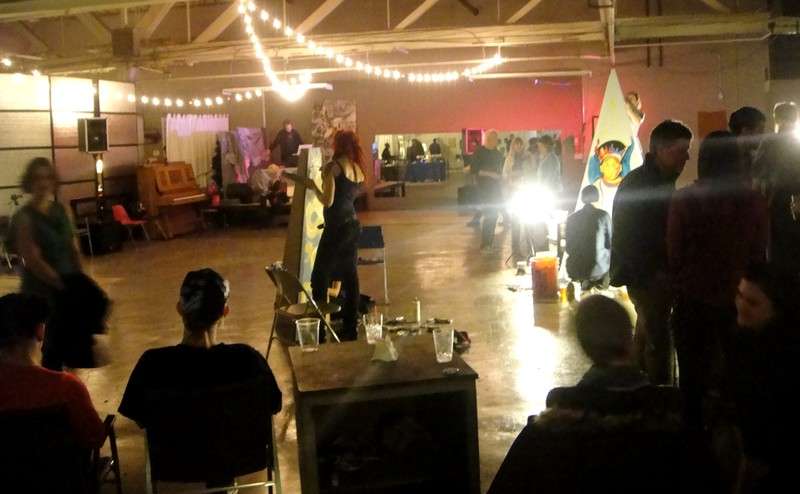 A bar stocked with New Deal Distillery’s donations served the dozens of attendees as they circled the performers.  A grouping of plaster cast breasts sat behind the painters.

For Tits Sake is working to combat the negative effects of a media fixated on an unrealistic standard of beauty.  “Striving to live a body positive life,” several pieces from a collection cast from 100+ different women’s breasts stood on display. 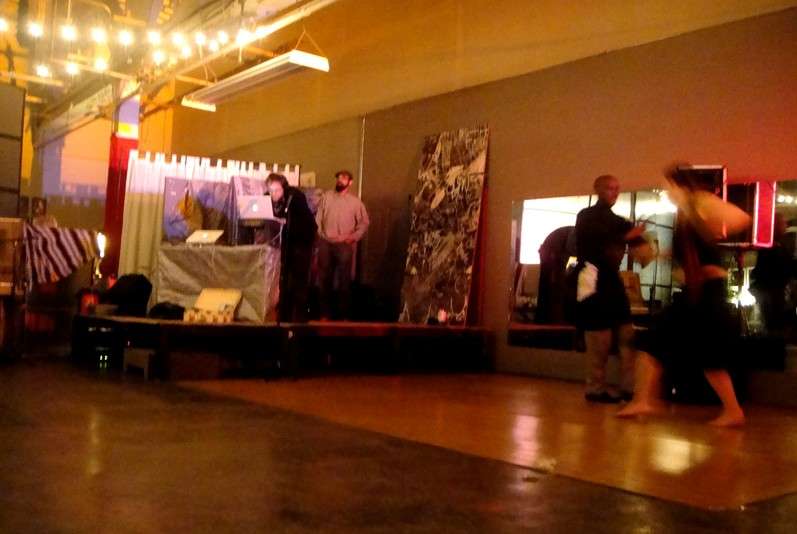 On a small stage across the room Daytrip to logos wrapped up a dj set of low key tunes, giving way to Josephine.  She introduced herself as a local composer before proceeding to fill the high raftered ceilings with vibrating piano strings.  Gershwin’s Summertime drifted across the room to the beat of spoons on a washboard.

The Center’s director Alexeisia Castalano spoke a few words thanking everyone for attending before briefly talking about the space and event.  Castalano encourage bidding on the silent auction before handing the microphone off once more.  Josephine took up where she left off and the low buzz of scattered conversation quickly filled the gaps left by string and spoon. Josephine thanked everyone to smattered applause before DJ Mom reemployed the speakers.

The main attraction for most centered around the local artists creating pieces for Hump Day’s upcoming street fairs.  A variety of styles and techniques converted blank wood into expression.  Ariel Chevelle sat thoughtfully, turning an empty space into a powerful depiction of the thin boundary between our lives and our deaths. 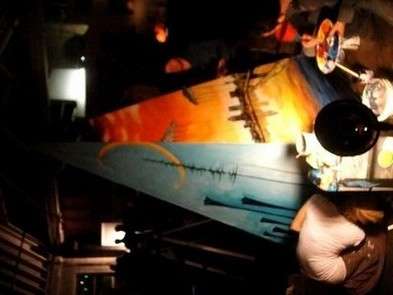 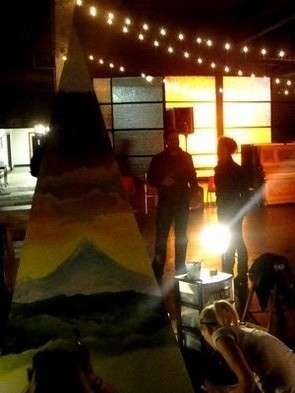 An impressionist’s dripping skyline of downtown Portland by native Riso stood nearly finished while he splashed detail.  Wrapping around the construction Purvis’s happy little trees soared toward the crescent moon in a fanciful nightscape.  A shift of perspective away Muir dappled sunset around what I assumed to be Mount Hood (didn’t ask) before Tarrant’s sacred child offered his solemn protection.  A masseuse worked in the distance while the artists made themselves approachable, taking breaks to discuss themselves and their work with the live studio audience. 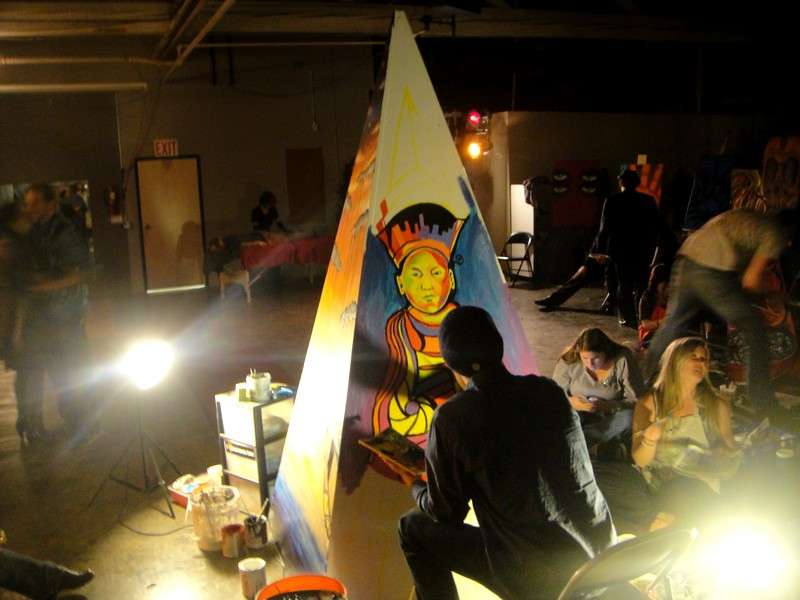 Today drifted toward tomorrow, DJ Mom dropping some heavier tracks as he worked toward the end of his set.  Farewells were offered with gratitude to the host and artists for their time and effort before moving toward the exit.  Walking through the city streets the necessity of art, music and gatherings for the health of any community was all the more 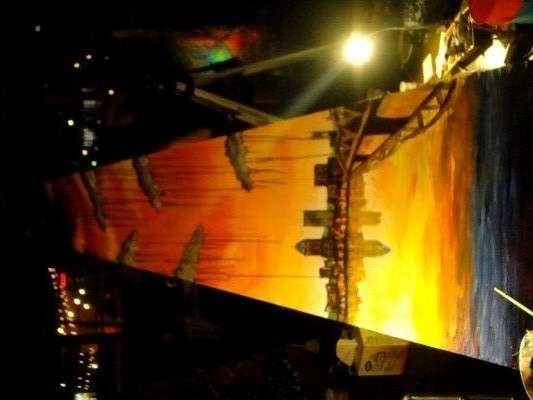 obvious.  Events like Hump Night are an effort to revitalize the populace, drawing people away from the disconnection of virtual interaction.

Hump Night’s third indoor event brought together talented artists and interested individuals.  Once things move back outside the pieces created through the darker months will add to the assembled expression of a vibrant community of artists.  With warm weather and clearer skies nearing the realization of everyone’s collective effort is a little closer every day.

One Response to Hump Night: An Art Social Hosted by Alexeisia’s Center for Arts