Skeleton Zoo’s pair of curators engineer mesmerizing sonic displays for their visitors.  Harps and mysticism fill the air before chanting floods a horizon of plodding “White
Elephants.”  Newsreel narration, chanting shamans, and a slew of orchestrations layer precisely, “a 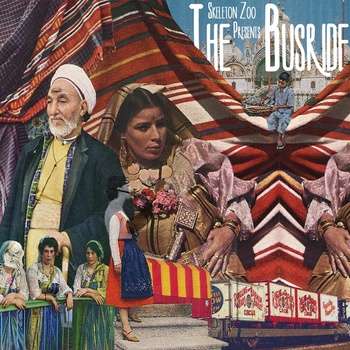 heavily bearded remnant of the beat generation.”  Strings and samples of the white man’s lackluster attempts to easily define what lies beyond understanding coalesce into a fleeting look at the world as it was.

Into the lonely night and skyward, The Busride stares upward as the expedition darkens.  Specters float across the inky blackness, stars shining through the gloom to eerie warbling.  Glitchy echoes of dub as a haunting voice caresses the loneliness of the witching hours.  Gears shift, shine piercing the dimness as a glittering “Rainbow Road” floods the windshield.  Hip-hop rhymes and synthesized technicolor speed pilgrims back into the silence of their thoughts as things shimmer to the close.

Check out their work for yourselves via the world wide waste.  Cost: free dollars on their bandcamp site.

pissin' off readers since Camp Clusterfuck X
View all posts by a career in the haw haw haw haw →
This entry was posted in Albums, Muzak and tagged albany, busride, electronic, skeleton zoo. Bookmark the permalink.