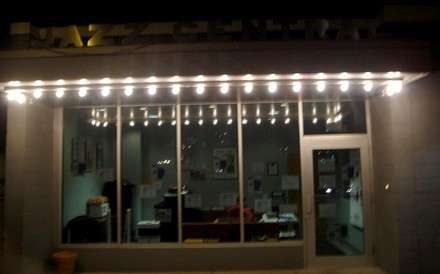 A wintry January evening reunited friends who began their  songwriting journeys together.  Jazz Central, a 78 seat theater owned and operated by Central New York’s Jazz Arts Foundation, hosted the trio of musicians getting together to play their songs while sharing the stories behind them. 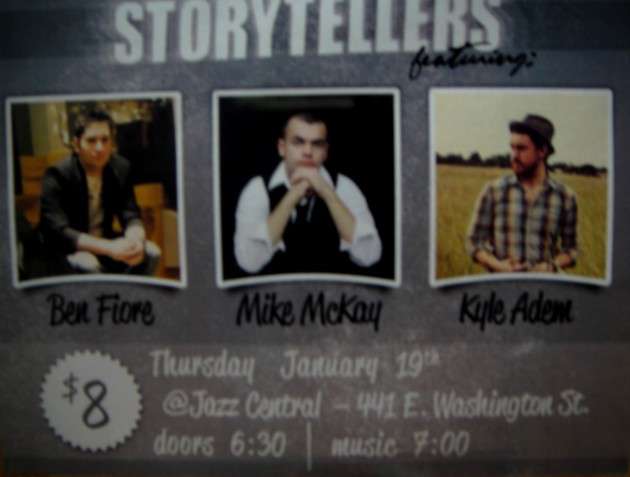 Three artists occupied the stage atop stools for the evening.  Amplified acoustic guitars accompanied each.  Ben Fiore, Mike McKay and Kyle Adem arranged themselves to match the flier, cords trailing across the stage into darkness.  The performance progressed in a round, each guitarist taking turns while they talked, laughed and shared with the audience. 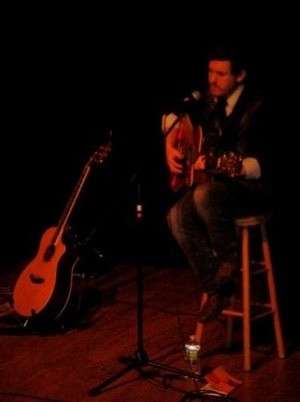 Two pieces at a time, friends cohabited the space, successively filling the room with vibrating strings and vocal chords.  McKay shared his start in songwriting, encouraged by the men surrounding him on stage years later.  Meeting one another at Lock 24 in Baldwinsville while playing Tuesday night open mic, their growth as musicians helped push one another to become better as well.  Thursday night they came together again after walking their separate paths. 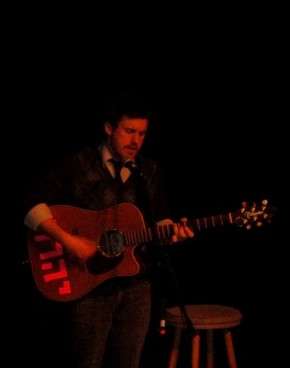 McKay introduced Kyle Adem as the most talented musician he knew.  A soft chuckle slipped from Adem’s mouth, a few jankey chords wincing from a guitar adorned with Hebrew written in fluorescent pink duck tape. A more melodious sound emerged, bespectacled eyes staring down in concentration for a moment before turning toward the waiting microphone.

Drawing inspiration from his sojourn through life’s winding trails, Adem’s music reflects the realities of a young man searching for his place in our world and an understanding of the deeper mysteries surrounding existence.  Words about love, life and the inner struggles each person must face blend soulfully around harmonies bursting from fingers firing

across waiting strings.  A self assured baritone capable of reaching the high notes creates a sound that overtakes the space.

Family and friends were in attendance.  Arem changed his set list at the request of his father, captivating the audience with an intense piece.  Humor and romance characterize many of his compositions while another reflected on the shortcomings of his fellow man.  “People will be people.  Regardless of their creed.  And the rich and the poor man both annoy me equally.”

Folksy in the best possible way, Adem’s writing exudes Americana.  Somewhere between the Tennessee hills and the rolling plains of New York a sound was born to express the soundtrack of experience, good and bad, happy and sad.  Time rolls on heedless of our manic attempts to control it.  Thursday evening a young man radiated his honest attempts to arrange life’s variance in verse.

Finishing his songs, Adem mentioned the release of an album in May.  Through three girls, two religions and the death of his producer’s mother the record persevered.  House lights up, fans and family rose to congratulate the trio on their performance.  Three friends thanked everyone for coming as attendees exited to brave the snow swirled darkness.  Musicians collected their belongings, closing down the stage and a successful reunion. 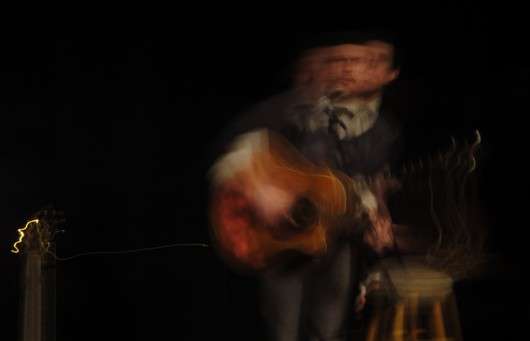 Check out Kyle Adem’s music for free here and here